The inspiration for the design of the 9.11 Memorial came from our experience at the World Trade Center from 9.11.2001 to 9.18.2001. Our team had a forward Base of Operation known as a BoO, on Church St. in Manhattan, NY just in front of and between WTC buildings 4 & 5. The 9.11 Memorial is depressed into the ground, and as many at home got used to the term “Ground Zero,” the rescue workers referred to the area as the “pit,” because when you went to search you went down into it. Our “pit” is encompassed with walls; the WTC site with debris. From our view on Church St, there was a bronze sculpture, known as The Sphere, which was located in the center of the former plaza at WTC. The Sphere was a work of art by sculptor Fritz Koenig, and was meant to symbolize world peace through world trade. For us at MA-TF1 and the rescue group working out of Church St., it was the focal point for our searches. The North Tower of the WTC was directly behind the sphere. From where we stood, to the North Tower, was our search area. We used The Sphere as the center of a clock. The North Tower became 12 o’clock and where our BoO was, became 6 o’clock. We started our searches at 6 o’clock and worked in a counter-clockwise rotation, due to some nasty green smoke which was covering much of the area to the left side of The Sphere. So if a team radioed to me and said they were 6 stories down at 3 o’clock, I would know their location. 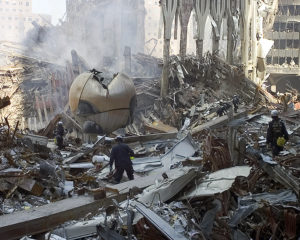 This is our translation of our memorial from 9.11.2001, you step down into the Memorial, there are 4 steps, each step you take down into the 9.11 Memorial represents a plane crash, 15 years ago today. When you leave the memorial you will have touched the steps 8 times = the number of paramedics killed that day. The walls, which are in the shape of a pentagon have three different heights, which represent the 3 different locations of the plane crashes. If you circled the the outside walls you would step on (3) surfaces twice. A total of (6) plus the circle (0) = 60. That is the number of police officers killed at the WTC Site. 37 Port Authority Police and 23 New York City Police. The (3) crash locations are also represented by our (3) main focal points:

Inside the Memorial you will notice quite a bit of gray. Gray was the shade of just about everything in the vicinity of the WTC, due to the collapses and the ash and concrete dust covering the entire area. The World Trade Center Steel, which was impacted by American Airlines Flight 11 came from the 93, 94, and 95 floor of the North Tower. As you approach the steel you will notice that the pavers underneath are random, which represents the chaos of the day. You will also notice the rust stains on the ground, which are the tear drops from the towers. The WTC Steel is raised 13.5 inches off the floor, which translates to 343 millimeters, which is the amount of firefighters that were killed on that day in FDNY (Fire Department of New York). Many others have perished since from sicknesses attributed to the rescue work at Ground Zero, there have been an additional 127 deaths (as of 9.11.2016), at FDNY, attributed to the response of 9.11. As you approach our sphere fountain, one can’t help but imagine the sacrifice of all the individuals on United Airlines Flight 93, that consciously fought to gain control of a plane headed for destruction somewhere in America, many think that it was headed for the U.S. Capitol. You will also notice a brass star inlaid into the floor, this symbolizes the 5 branches of the military and honors all veterans, especially those who went to war after the events of 9.11.2001. And for the military, as it’s been said about FDNY, all gave some and some gave all.

In closing, I would like to tell you what this 9.11 Memorial means to me. That we should never forget!

To my team members on MA-TF1, this 9.11 Memorial, that you see every time you enter our facility, is a reminder why you give up many precious weekends and many other days away from your family and friends training to be the best; because it’s not if we will ever be needed to serve our fellow Americans but when.

PS… If you sit on the bench and look up at the top of the WTC Steel. There is a piece of steel that resembles a hand “reaching out!”