MA-TF1 got a call from CT-TF1 “State Task Force” to respond with a search MRP to Middletown CT for a Building explosion. In 2010 Mission Ready Package’s (MRP’s) were not standardly used.  MA-TF1 responded with approximately 20 personnel and dogs.

The 2010 Connecticut power plant explosion occurred at the Kleen Energy Systems power station in Middletown, Connecticut, United States at 11:17 am EST on February 7, 2010. The plant had been under construction from September 2007, and was scheduled to start supplying energy in June 2010. The initial blast killed five and injured at least fifty; one of the injured later died in hospital, bringing the total death toll to six.

The blast at the 620-megawatt (830,000 hp), Siemens combined cycle gas and oil-fired power plant occurred at 11:17 am, and was reported at 11:25 am EST. The plant’s manager, Gordon Holk, said that contractors and other workers from O & G Industries, Ducci Electric, and Keystone Construction and Maintenance Services were at the site when the blast occurred. The explosion occurred at the rear of the largest building, the turbine hall, which was destroyed. Some residents reported “earthquake-like tremors” from at least 10 miles (16 km) away, although the blast proved not to be seismically detectable. Another resident of the area felt that it was more like a sonic boom. 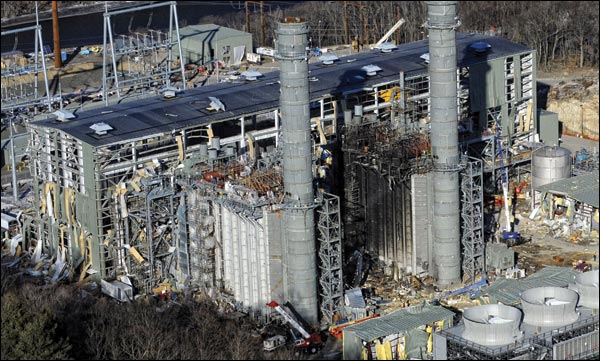